The major goal of this study is to investigate the implementation of TED Talk Video (TTV) as a media for teaching listening in the classroom and to explore the students’ response towards TTV in teaching listening. Listening skill, as one of the most important skills in English, needs excellent media as a great support to teach students about it, and TTV is assumed to be fascinating media to teach it. The common problem faced by the teachers in teaching listening is that they lack of alternative media to be used to teach it. Conventional way is the only way to teach them, such as by providing the audio sound which is not effective to teach listening. So, this research is considered to be important as a means to explore the implementation of TED Talk video. This qualitative research method involved a class of STKIP Al-Hikmah students who rich B1 level of English proficiency where most of them faced the similar problems in learning listening. The data were gathered through interview, observation, and questionnaires. The data collected by the researcher revealed that TED Talk Video is suitable and applicable to be implemented for students who are in B1 level of English proficiency. The data also proved that both teacher and students felt more comfortable to conduct teaching-learning process. Most students said that TTV gave more advantages than the disadvantages related to their listening skill. Thus, it can be assumed that TTV is pertinent media to be used for teaching listening.

Most read articles by the same author(s) 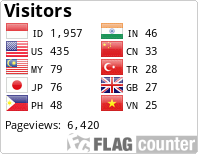